At N.D. CARE NIROGAM (P) LTD. we believe that infertility, like any other disorder is a completely individual case. Infertility is not an independent disease, rather a cardinal feature of many imbalances. We work on establishing harmony within and outside body and avoiding any side-effects and at the same time, improving overall health of an individual.

In cognisance of ayruveda percepts, we work on the three aspects of the male and female reproductive organs and overall health. We consider three elements for conception of a healthy foetus: Ritu, Kshetra, Ambu, Beej:

Ritu (Appropriate time for conception) - Here period indicates two things a) Age of both male and female partners, b) Days eligible for conception depending upon ovulation.

Kshetra (Seat for conception) - The word Kshetra refers to the Uterus, Uterus should be in healthy state so that it can hold the foetus for upcoming 9 months and provide nourishment and safety.

Ambu (Nourishment for concieved foetus) - Ambu means water, here it specifies nourishment to the foetus growing in the womb, this depends upon the generalised nutrition of the mother.

Beej - Beej explains the need of competent male sperm and equally healthy female ovum. Both the sperm and ovum is termed as Shukra Dhatu in Ayurveda, meaning the reproductive tissue. With the help of our unique herbal combinations, we enhance the quality of both male and female SHUKRA DHATU making it more capable for conception.

We administer various rasayans to reduce debility and make uterus stronger and better prepared for conception and nurturing foetus for the development of healthy pregnancy.

In Shastras, there is a shloak, which explains the concept of dhatus and formation and role of shukra in conception. It explains that the SHUKRA TISSUE CREATED AS PART OF A LONG CHAIN OF METABOLIC TRANSFORMATIONS, STARTING WITH THE DIGESTION OF FOOD AND INCLUDING THE TRANSFORMATION OF FOOD TO NUTRIENT FLUID, BLOOD, MUSCLE, FAT, BONE, BONE MARROW AND FINALLY, TO SHUKRA TISSUE and Shukra Tissue becomes the seed for conception.

As per Ayurveda, conception takes place due to healthy sperm, healthy ovum, and a healthy uterus. For both men and women, reproductive health depends on the health of the shukra dhatu, or reproductive tissue. Artava is the equivalent term used to mean ovum. However, artava also refers to the menstrual blood, a product of rasa dhatu. Thus, shukra is the best term to describe the factor that nourishes. In women the shukra tissue creates the ovum as part of the monthly cycle, and in men the semen is formed due to sexual stimulation.

Shukra means bright, pure and radiant. It can also mean the "essence" of something. Ayurveda explains body is composed of seven Dhatus, of which Shukra is the end of the line in the dhatu transformation cycle. There is, however, an aspect of shukra dhatu that undergoes a different type of transformation called sublimation. From the sublimation of shukra, ojas is formed and ojas then becomes a part of every dhatu providing it with strength and stability. The journey from rasa to ojas is a cycle that takes six days according to vaidya Charaka and one month according to vaidya Sushruta.

During the process of digestion each dhatu nourishes with nutrition to carry our physiological tasks in the body; and all the seven tissues of the body contain their own Agni to metabolize the nutrients supplied to them through the channels of circulation.

We work on strengthening metabolic processes and removing blockages, invigorating each dhatu which ultimately increase the potency and quality of beej (ovum) also. We check eratic pathways to lessen srotoavarodha (blockage of channels) and work on removing the blockages and channelize the flow of nutrition and energy among all dhatus, thereby increasing micro- circulations and opening up and purifying the complete body.

Our Medicines contain precious minerals like pearl and gold compounds for increasing the effect by quickly permeating the tissues and thereby reducing srotoavrodh of the channels, and easy transport and diffusion of nutrients through all the seven tissues. Our medicines are very quick to act and start showing signs of improvement in the patient from the first dosage itself and one can expect its consumption for the shortest duration. 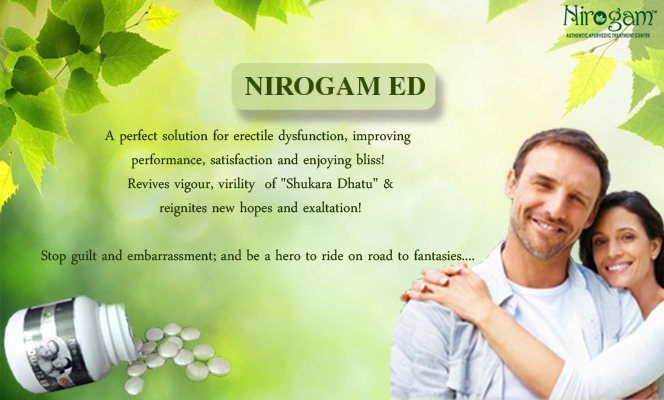 N.D. CARE NIROGAM (P) LTD., has developed revolutionary medicine NIROGAMZ ED......which offers complete solution for male and female reproductive health, covering all aspects. It increases the quality and quantity of semen, increases the sperm count, sperm motility and and works at fertilization promotion, provides rejuvenation for female. It helps well for female infertility and to improve their libido too. Male desire and potency augments and it gives one the strength and potency of a horse. It is also useful for aged people.

"Vājīkaraṇa" is a specialized branch of Ayurveda which deals with sexual dysfunctions, Infertility and their management for attaining healthy progeny. This is a super specialty specially to improve the sexual health, to enhance the quality of śukra and to please the mind. Vajikaran is the to the Science of aphrodisiacs and treatment modality as per Ayurveda and proposed benefits are manifold, including increased sexual capacity, improving health of future progeny as well as in treatment of many common sexual disorders like infertility, erectile dysfunction and premature ejaculation.

This therapy provides potentiality for getting offspring and causes instantaneous sexual excitation sufficient enough to get satisfaction and to satisfy his partner too.

This treatment is adopted in ayurveda to increase libido, quality and quantity of semen, increasing the hardness, duration of hard erection, preventing premature ejaculation and to treat sterility and frigidity in female.This therapy increases the strength of a man to perform sexual act, like a horse ( 'Vaaji'=Horse.)

People with age group (between 16 to 70 years) can go for vajikarna. Vajikaran is good for health and influence mental health also and psyche (mind) is considered as the origin of momentum for sexual desire. Mana (mind) is also called as manoj in Sanskrit. Thus it can be utilized for treating disorders of the mind for e.g. depression. Vajikaran thus deals not only with modes of increasing sexual vigor but also psychosomatic disorders.

Causes for Low Libido (According to AYURVEDA)

In Shashtras, there are shlokas drawing importance of vaajikaran therapies: As per Charak Samhita:

By proper use of these formulations, one becomes endowed with good physique, potency, strength, complexion and sexually exhilarated and potent like an 8-year-old horse.

“The man who seeks pleasure should resort to Vajikaran, i.e., vilification therapy regularly. The Vajikaran bestows contentment, nourishment, continuity of progeny and great happiness. The medicines or therapy by which the man becomes capable of sexual intercourse with the woman with great strength like a horse, which endears him to women and which nourishes the body of person. It is best promoter of strength and vigor.